The sense of smell may rank below sight and hearing for humans, but it is the most developed and depended upon sense in a great number of animal species. In jungle habitats, 99 percent of the animals depend on chemical trails and bits of odor released into the air or water. This is not surprising, as heavy vegetation limits one’s visual abilities. Insects are the masters at scent identification. The many types of ants have multiplied to where they comprise 70 percent of all insects in the tops of jungle trees. Much of this success can be attributed to their acute sense of smell. Snakes, fish, and many mammals also have highly developed olfactory centers.

Smell and taste are often experienced together, but each is separate from the other although thought to be connected. Inhaled molecules passing through the nasal passages come in contact with the olfactory bulb. Nerves then relay the message to the brain. Observing the size of a species olfactory bulb (relative to body size) can predict the acuteness of this sense in each species.

In mammals: bears, canines, and especially elephants rely heavily on scent signals. One such canine, the RED FOX, has a terrific sense of smell. This is important because foxes, although they can readily detect movement, are short sighted. Using smell in tracking prey, it becomes a lean, mean, hunting machine. Scent signals help it to relocate food caches, and to avoid bobcats, bears, and wolves. It has, also, been diligently hunted by humans and its acute senses have given it the reputation of being the embodiment of cunning.

The Red Fox is 1 ½ to 3 feet long and around 14 pounds. However, the farther north they are found, the larger they are. It is reddish-orange with whitish fur on its neck and chest. The tail is long and bushy. Regardless of any color variation, its tail is always tipped in white. As a family oriented animal, both the male, female, and older offspring cooperate in the care of the pups.

GOSS’S RULE states: “When two species share the same habitat, and also share the same niche, the dominant species will push its competition out.” This is classic between coyote, fox, and wolf. Yellowstone Park provides a situation where this rule is very noticeable. Before the introduction of wolves, there were many coyotes and fewer fox. Since their introduction, wolves have expanded greatly, coyote numbers have decreased, and the Red Fox population has increased.

It stands to reason that size plays a big role in the dominance of these three canines. Wolves, especially when hunting in family packs (usually 4 to 7), can bring down larger prey than coyotes – hunting alone or even cooperatively. Also, bigger groups contribute to a species ability to dominate, and larger canine will kill the smaller ones when they catch them. I have witnessed wolves chasing coyotes that were brazen enough to approach a carcass fed upon by wolves. I have seen coyotes escape, but also observed one that was unlucky. Because the Red Fox feeds mainly on smaller mammals and birds, it is not as competitive to the wolf as is the coyote – which has an expanded diet.

Gray wolves look like large German Shepard dogs. Coyotes are somewhat smaller, lighter in coloration, and have a more pointed face. The Red Fox is considerably smaller, with a slender body, reddish tinge to its fur, and with a white tail tip.

Vegetation eaters, when their populations increase, have the ability to destroy their own habitat. Thus, predators keep these populations in balance. Predators are also breeding selection factors for prey species. They weed out the weak, the diseased, and the old (who no longer reproduce but still eat). Nature’s ways sound cruel, but they are necessary to keep herbivore numbers at the maximum that the habitat can withstand 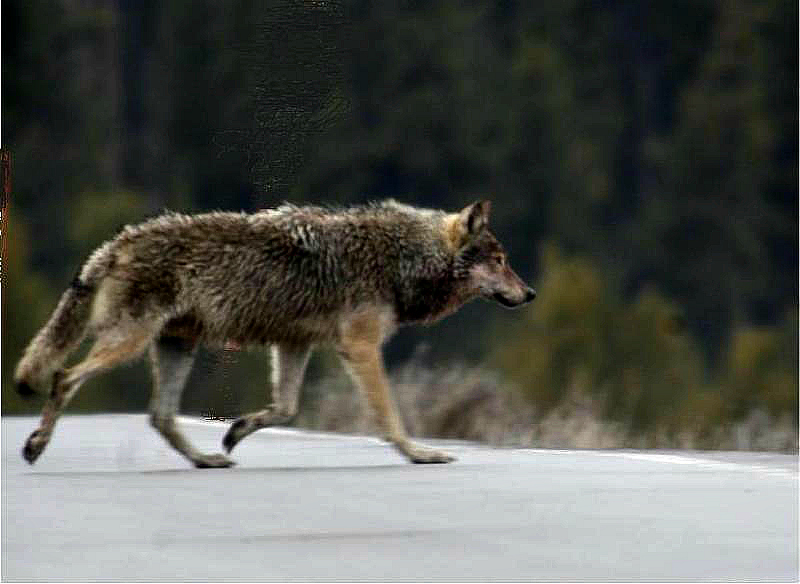 A Gray Wolf: Top dog in the predator hierarchy