It’s hard to imaging an animal that is so big and covered with armored skin to be sensitive to anything. Yet the skin around the top of the snout and along the jaws is more sensitive than our finger tips. They can detect touch that is too faint for our fingers to feel. Their most sensitive areas are in the gums along their teeth.

Cats of all kinds have sensitive whiskers and elephants very utilitarian trunks; traits that rival the gators sensors and help each species in their struggle for survival. These sensitive areas can allow animals to identify prey, or whatever they come in contact with.

Alligator jaws that can shut with a tremendously powerful force are, otherwise, weak enough that one could hold their mouth shut with one’s hands – a striking contrast between force and gentleness. The touch sensors allow a special gentleness when the female responds to peeping coming from her ripened eggs, which she carefully opens and then carries her new babies in her jaws to safety. Clumsiness would result in a lot of young ones getting accidently chewed up.

Alligators are more adaptable than their crocodile cousins. This has allowed them to spread farther north. They are top of the food chain predators that feed on a wide variety of animals: fish, amphibians, reptiles, birds, mammals, and even your dog. They shape habitats where they live by digging “gator holes” which can modify the wetness or dryness of an area. Other organisms benefit from these modifications. 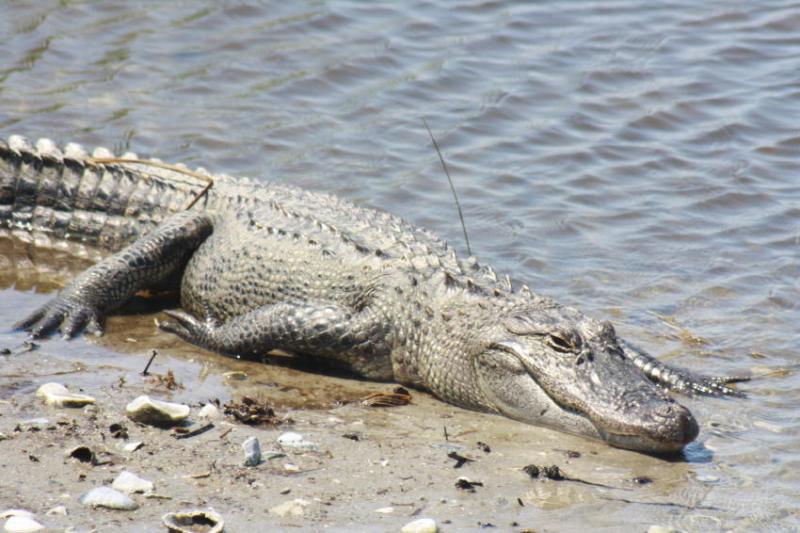 Resting and warming in the Texas sun